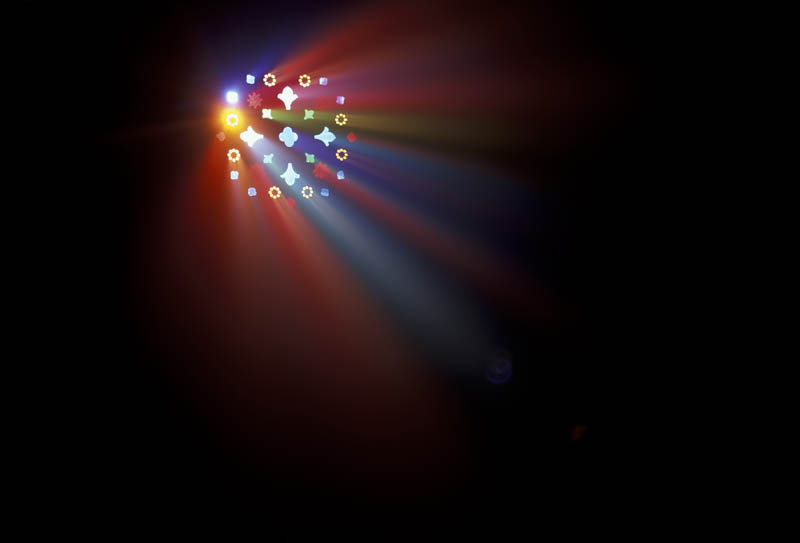 “The Prisoner’s Cinema” is a phenomenon described in neurology as a hallucination, that appears after a prolonged absence of visual sensations. A blind screen of hallucinations forms itself on the eyes cut off from visual stimuli. The subject can see this projection, but fails to register these mental images, transforming it into an intimate and personal experience. In 1954, a scientist studied the syndrome of prisoners locked up in dark cells. This phenomenon is also common to truck drivers caught in a snowstorm. Melvin Moti is interested in the relationship between hallucination and formalism. Constant forms and geometric shapes appear on a recurring basis. A constant form is a form whose interpretation is not based on a cultural contingency, but that appears at different times and in different cultures, and forms no history and no future. The Prisoner’s Cinema consists of abstract images, rays of light through a window, and explanations of a scientist describing his vision after undergoing sensory deprivation for several days. This is about the origins of the film, creating an image of the power image of the subject, the unconscious, history of abstraction and formalism.

Scientific research, high and mass culture, and the processes of cultural production in contemporary society plays an important role in the work of Rotterdam-born artist Melvin Moti, currently based in Rotterdam and in Berlin. The artist whose practice traverses films, books, objects and drawing, enquires into the power of human imagination and abstraction, looking at how perception works neurologically and psychologically. His earlier works include a guided tour in the empty rooms of the Hermitage through memory (No Show, 2004), the human ability to make images appear on the retina from total darkness (The Prisoner’s Cinema, 2008) or the representation of the fourth dimension (The Eightfold Dot, 2013). The artist gives form to obscure anecdotes, incidents, and individuals — or, what he calls black holes — that he claims haven’t been contextualized by official history. Concerned with history and its influence in cultural production, Moti researched the Cosmists, an early twentieth century Russian group of thinkers responsible for Cosmism, the philosophical and cultural movement that combined occult and esoteric theories with space science. By comparing statistics, scientist and member of the Cosmists, Alexander Chizhevsky, discovered a correlation between solar activity (such as sunspots) and major historical events on earth (such as wars, revolutions, epidemics and natural disasters). In several studies Chizhevsky describes how one can observe an increase in wars, revolutions, and in epidemics on earth during years of high amounts of solar activity, while years with a low amount of solar activity correspond to a decrease of military and political events on earth. Chizevsky called this observed synchrony “historiometry”. While studying this history, Moti produced two works in 2015, a film Cosmism and a series of silk works, Cluster Illusion.
Biography
Melvin Moti
Born 1977, Netherlands
Lives in Rotterdam
Details
21 min
35 mm film
Related
Screening of Melvin Moti's film "The Prisoner's cinema", 2008., Paris