Pedro Neves Marques
The Pudic Relation between Machine and Plant 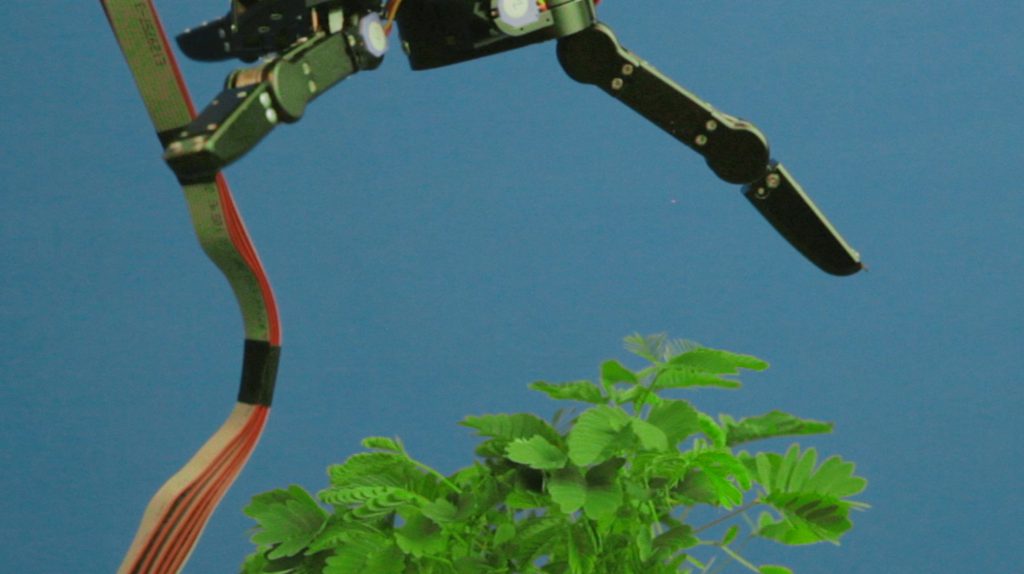 The Pudic Relation between Robot and Plant (video still)

The Pudic Relation between Machine and Plant shows a looped scene where a robotic hand touches a “sensitive plant” — Mimosa Pudica, a species characteristic for closing on itself when touched. The name of the plant was derived from Carl Linnaeus sexual taxonomy of plants: pudica referring both to the external sexual organs, shyness and modesty. In a poem written by Erasmus Darwin (Charles Darwin’s grandfather) titled The Loves of the Plants (1789), this plant is associated, jokingly, with British Botanist Joseph Banks’s famous sexual adventures during his botanical expedition to the tropics. Native to South America, today this sensitive plant is an invasive species in Southeast Asia, Australia and the Pacific, precisely the geography where Banks had his sexual adventures. The video, and its references, speaks to environmental colonialism, the heralding of so-called pioneers as producers of knowledge. The film perhaps speaks to a new frontier, the cultural colonization through technology. The film subtly references the past, and implores that we reconsider the previous methodologies in understanding sexuality, technology and science.

The work of writer, visual artist and filmmaker Pedro Neves Marques focuses on the politics of nature, in specific relation to ecology; economics; cultural production; and social and ontological segregation. In recent years, he has explored South American animist cosmologies, in order to understand current cosmopolitical transformations of both capitalism and anti-capitalist struggles. Marques is the editor of the book The Forest and the School/ Where to sit at the dinner table? (Archive Books and the Akademie der Kunste der Welt - Koln, 2015), an anthology on Antropofagia (literally, cannibalism) through the lens of anthropology and ecology in Brazil.
Biography
Pedro Neves Marques
Born 1984, Portugal
Lives in New York
Details
2 min. 30 sec.
video loop, sound
Related
Chengdu, China: A4 x KADIST Video Library Project, International
Prophecies for the Second Machine Age, International
Cleveland, United States: Double Takes, International