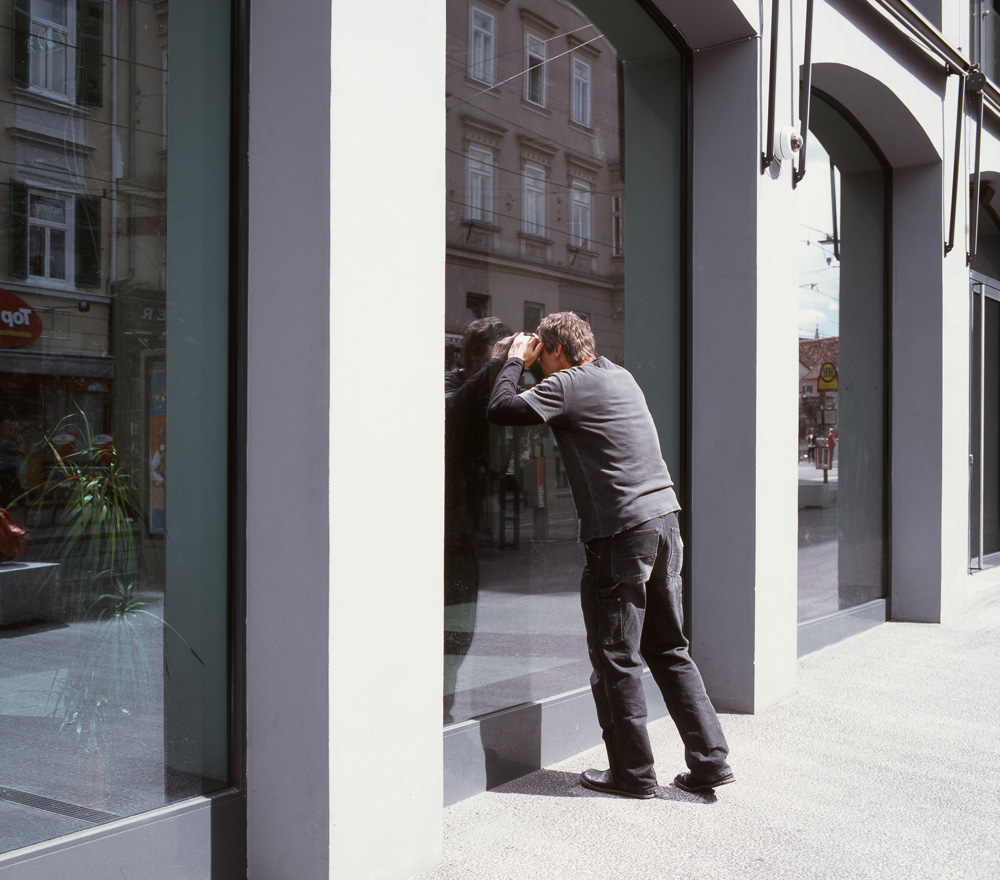 “A man wanders near the windows of a gallery, situated adjacent to the street. He occasionally gazes through windows into the gallery but never enters.” Passersby are numerous since these windows are by a tram stop on a busy street. It is surprising to note how few of them take any notice of this man peering repeatedly through the slightly tinted glass into an empty meeting room with no distinctive signs to be seen. It turns out this was a performance at the Kunsthaus in Graz. A annunciating drawing with the same title was shown in Ondák’s solo show More Silent Than Even at gb agency in Paris the same year; this show also included an invisible eavesdropping device. The uncomfortable connotations of surveillance, whether visual or aural, in everyday situations or art galleries, were in focus.
The camera shots following this strange act of insistent staring and squinting vary from different perspectives outdoors or from inside the space looking at him, with consequent shifts in soundscapes.
In The Stray Man‘s exercise in curiosity, nothing happens. This action in the public sphere could appear useless. But this extended, seemingly trivial, gesture is a contemporary poetic take of the act of looking, on its meaning today, its possibilities and difficulties applicable to the art world as much as to human and socio-political permissiveness or constraints at large.

In 2009, Roman Ondák won the Golden Lion at the Venice Biennale for Loop, the Pavilion of the Czech and Slovak Republics, for which he brought the same plant-life and trees growing outside inside. This highly considered installation epitomizes Ondák's work. With often discreet, tongue-in-cheek, conceptual, participatory modes, he succeeds in profoundly questioning the art world and its established quirks, exhibition spaces, behaviors like queuing, labeling or various pedagogical approaches, visitor experience, any misplaced preciousness about authenticity or authorship. Various tactics (asking friends for drawings) or forms (shoelaces for instance) recur in his photographs, performances, installations, videos.
Borderlines are deliberately blurred between the exhibition space and reality. This is infused by his relation to each specific project context and by his own ongoing experience of changing Eastern Europe.

Roman Ondak was born in 1966 in Zilina, Slovakia. Lives and works in Bratislava .