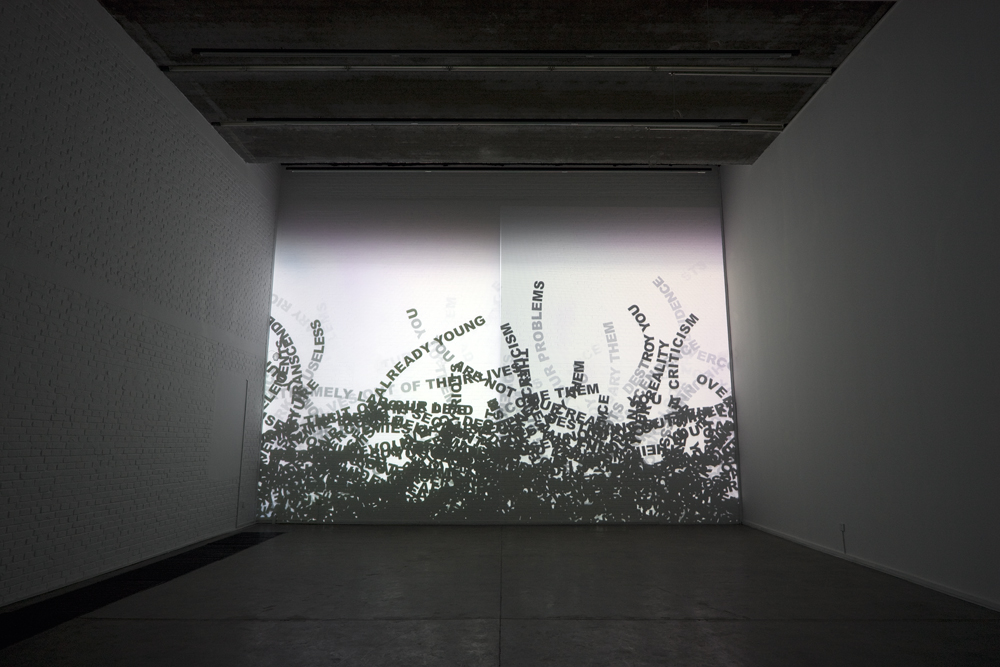 The Third Seal-They Are Already Old, They Don't Need to Exist Anymore

The Third Seal—They Are Already Old. They Don’t Need To Exist Anymore is part of The Seven Seals, Tsang’s ongoing series of digital videos that are projected as installations onto the walls and ceilings of dark rooms. Using texts and computer technology, the series draws its reference from various sources—the Bible, Judeo-Christian eschatology, existentialism, metaphysics, politics, among others—to articulate the world’s complexity and the dilemmas that people face while approaching “the end of the world.” The Third Seal is a nineteen-by-twenty-seven-foot projection on a single wall that, together with sound, creates an immersive and dynamic environment. Crawling up from the bottom of the wall are black, worm-like texts that comment on class struggle, revolutionary riots, labor and production, human existence, and social justice. Without a clear beginning or end, the work suggests a cycle and the non-linear nature of history, and, by extension, life and death.

Navigating relationships among words, images, and languages, Tsang Kin-Wah’s text-based work span various media: wall prints, silkscreen, and digital video projections. His wallpaper prints usually feature beautiful floral patterns that recall the swirls of nineteenth-century decorative wallpapers. However, upon closer inspection, details reveal the patterns to be composed of text in both English and Chinese characters. Their provocative and sometimes offensive meanings mock art, the art market, the artist and his Chinese ethnicity, as well as other broader culture issues. In 2009, Tsang began experimenting with new media and produced The Seven Seals, an ongoing series of digital video installation works that takes its name from the New Testament’s Book of Revelation. Tsang’s practice allows a range of interpretations and encourages viewers to search the relationship between image and text, between pictographic and phonetic writing systems.
Biography
Tsang Kin-Wah
Born 1976, Hong Kong
KADIST VIDEO LIBRARY
Login to watch video
Related