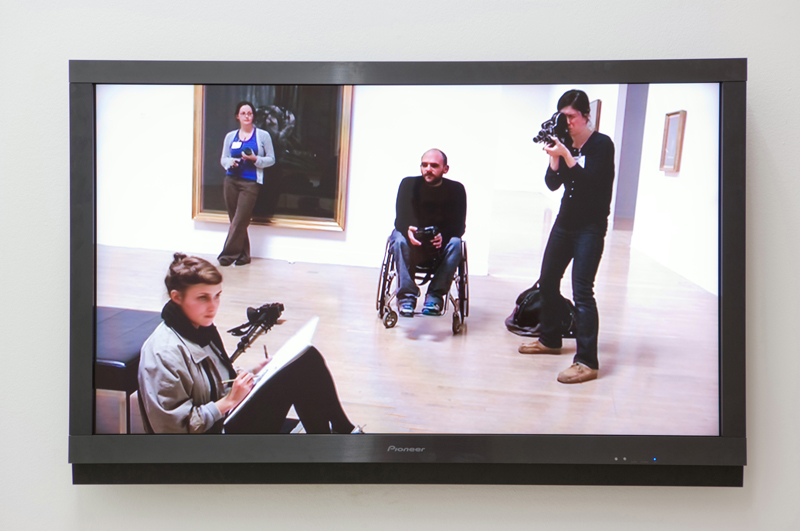 The work consists of a work inside a work. The spectator is presented with a commissioned documentary on a flat-screen Tv on the subject of the production of the making of an artwork that doesn’t exist entitled The magic and the meaning (2008). The imaginary film, The magic and the meaning,  is described only within the documentary, which follows parts of the making of the film, extracts from interviews with the writer and film maker Dan Fox and the artist and maker of the work Ryan Gander; as well as showing short slow-motion sections of the film that does not exist. The imaginary film is described as taking the form of a 16 mm black and white film study of young art students in an exhibition of Francis Bacon at Tate Britain, London. The film documents the students drawing and sketching the paintings that they see on the walls in their sketchbooks,  as an act of association to the world of art through a romantic gesture.

Ryan Gander’s practice explores what-ifs, questioning the structural limits and rules of society and being. His work, which ranges from installations, sculptures and photographs, to performative lectures, publications, inventions and intervention, looks at the production of art and culture, to enquire into the processes through which art is perceived and valued. The spirit of his practice centers on development, education, and storytelling, hoping to evoke immediate and honest engagements by the viewer with his narratives. Gander is a collector. His studio is filled with found images, personal images, printed documents and newspaper clippings.
Biography
Ryan Gander
Born 1976, UK
Lives in London, Suffolk
Details
26 min 48
Color video
Related
General Rehearsal (Moscow), International
A Guest Without A Host Is A Ghost, International
It's a right Heath Robinson affair, by Ryan Gander, Paris
The backroom, Paris
Ryan Gander's On Honesty hosted by Joseph del Pesco, San Francisco