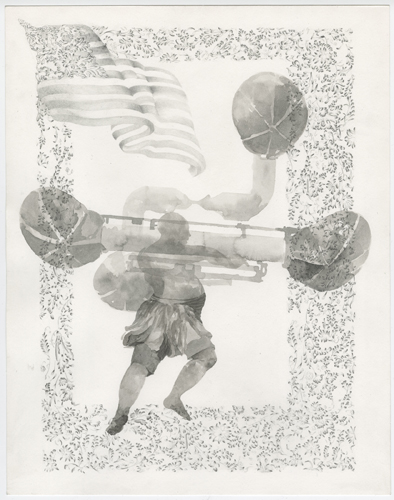 Sikander’sapplication of ink is nearly translucent in Tone Deaf Brass. Depicting a warrior holding what seems to be a bazooka, or perhaps a trombone while the American flag flutters above, Tone Deaf Brass is a commentary on Pakistani-American relations. The bazooka, AK-47 or trombone is attached to four parachutes—one discretely billowing and mirroring the American flag. The artist’s depiction is ambiguous: there is no logical conclusion to the action being witnessed. Commenting on the paradox of geopolitical relations between what is contemporaneously and erroneously described as the homogenous Middle East and the leader of the Free World (America),Sikander’s play of identity and symbols is framed with a delicate floral border, in which the warrior floats.

Shahzia Sikander is known for her richly layered and intricately detailed graphite, ink, and gouache paintings. She studied miniature painting in the late 1980s at the National College of Art in Lahore, Pakistan, with the forms and techniques of Indo-Persian miniatures heavily influencing her approach. Sikander’s practice explores the concepts of “East” and “West,” using traditional strategies of storytelling and themes of popular mythology to deconstruct the postcolonial legacy of the Indo-Persian region. In 2001, Sikander began to employ digital animation to create video works based on her drawings. Her practice traverses painting, drawing, animation, installation, and video, to radically rearticulate the tradition of miniature painting. Sikhander uses the technique to address contemporary issues, including the Western fear of Islam, the globalization of Western ways of living, and gender identity, focusing specifically on Muslim women in the West. The artist’s use of a traditional and scholarly approach to discuss the conflicts in the global condition creates a unique oeuvre--the digital animations, breathing new life into Mughal-era miniature painting.
Biography
Shahzia Sikander
Born 1969, Pakistan
Details
35.6 x 27.9 cm
Graphite and ink on paper
Related