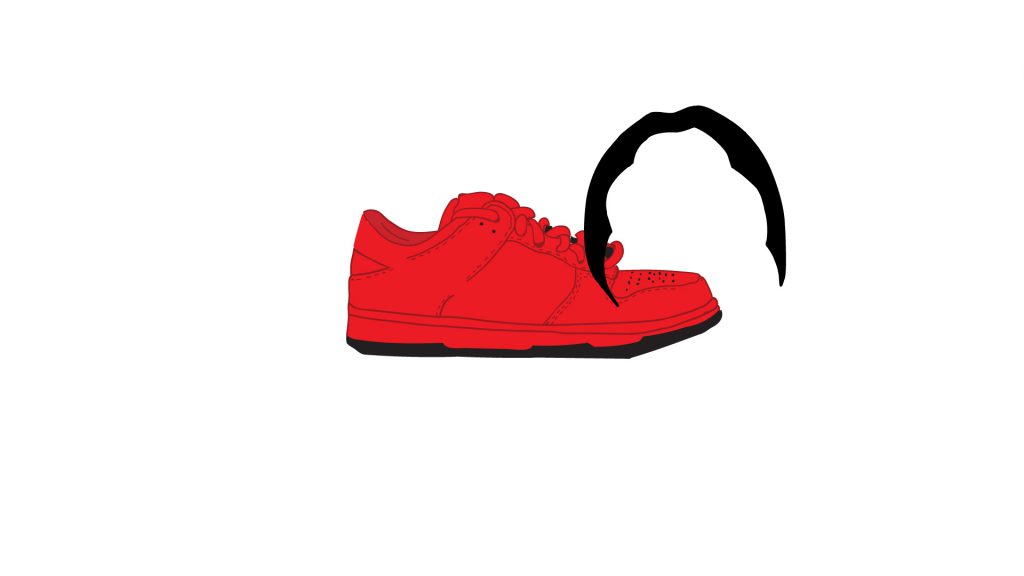 In 2003, Nike released a pair of red and black sneakers (the Dunk Low Pro SB) that were marketed as “vampire” sneakers. Interested in how a large corporation co-opted a historical fiction (the vampire), in addition to the traditional red and black colors of radical politics and the avant-garde, Danielle Dean’s work True Red considers how capitalism can gentrify notions of radicality and the mutable nature of advertising.

Set to a low-pitched ominous soundtrack, the video begins with what looks like an oozing pool of blood, from which a vampire sneaker emerges. Its black “swoosh” melts off it’s side and mutates into a bat, which then morphs into a dense puddle of oil, then a castle, and then into a group of factory assembly line workers. As the animation shifts, the boundaries between objects break down and merge, suggesting hybrid forms and the capacity for objects to seemingly acquire a life of their own.

True Red relates to Dean’s ongoing interest in how advertising shapes subjects, and what our relationship and agency is in circulating these objects. Sneakers themselves are symbols of cachet and power in some communities and subcultures. The work also gestures to Nike’s vampiric accumulation of wealth and the violence against workers in China who produce their sneakers. A vampire could also be regarded as a colonial subject, if a vampire bites you, you either die or become a vampire. Assimilate or suffer the consequences.

Danielle Dean creates videos that use appropriated language from archives of advertisements, political speeches, newscasts, and pop culture to create dialogues to investigate capitalism, post-colonialism, and patriarchy. Her work focuses on how subjectivity is constructed in relationship to mass-marketed products, and how our behavior is molded by advertising. She also explores the dimensionality of materials and functions of technology through the lens of her own multinational background, and how they can be used as tools of oppression.
Biography
Danielle Dean
Born 1982, USA
Lives in Los Angeles
Details
3:45 minutes
Hand-drawn digital animation, color, sound
Related
Cosmic Mumbo Jumbo, San Francisco
Cosmic Mumbo Jumbo, International