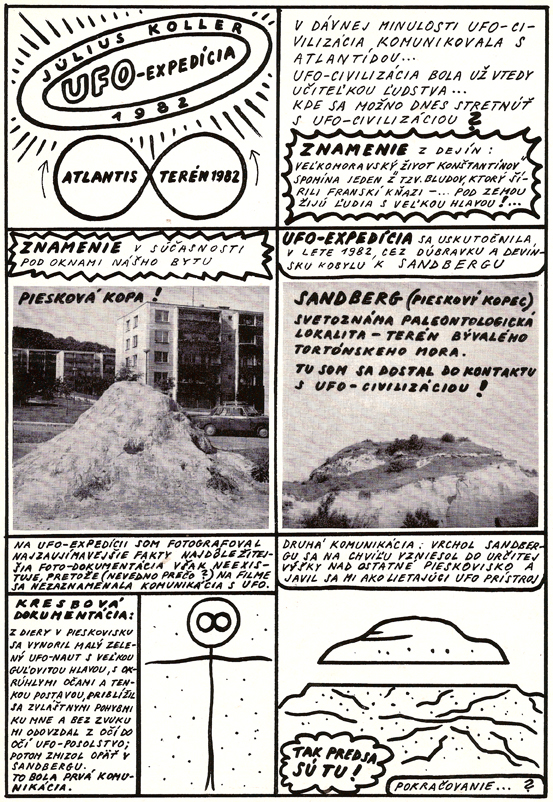 Wordplay was a central focus of Koller’s work, in particular the acronym U.F.O., which he adapted in his diagrammatic drawings to stand variously for Univerzálna Futurologická Organizácia (Universal Futurological Organization, 1972–3), Univerzálny Filozoficky Ornament (Universal Philosophical Ornament, 1978) or Underground Fantastic Organization (1975), and which also appeared in a series of slapsticky self-portraits titled ‘U.F.O.–naut’ (1970–2007). These infinite variations on a common cipher constituted an insistent incantation of the Utopian principle. Friedrich Nietzsche argued that to realize a fundamental critique of ‘bad faith’ means to move beyond cynicism and embrace a radical optimism that exceeds the petty dialectics of expectation and disappointment. In his approach to life and art as the U.F.O.–naut, Koller embodied precisely this: he actualized the potential of his imagination as a form of existential agency. As we get entangled in the strange possibilities of art and ideas, we all become U.F.O.–nauts and are deeply indebted to Koller, our patron saint of U.F.O.–nauts.

In its stringency, obsession and peculiarity, the oeuvre of Julius Koller is one of the most idiosyncratic and consistent in European art since the 1960s. Yet Koller is not only a seminal figure in the history of the neo- and post-avant-garde; his work has long been a critical inspiration for artists and intellectuals. In the most recent past, Koller's concepts of the Anti-Happening, the Anti-Picture, the Universal-cultural Futurological Operation (U.F.O.), his actions, objects, texts and the enormous referential archive he built up, have attracted growing interest on the part of a broader art public.  From around 1960, in response to the modernist mainstream in Slovak art, Julius Koller began to develop his aesthetic position of the “antihappening.” His strategy consists in using real objects and everyday life as the predefined program for an aesthetic operation: from 1965, in texts rubberstamped on paper that refer to the context of the “anti-happening,” and then in 1967/1968 in pictures for which Koller used white latex paint instead of oils and which saw the first appearance of the question mark—the symbol of Koller’s brands of naming, or “making known,” that was later to undergo many mutations in various media and states of aggregation. The “invitation cards for an idea”—as Koller called the text works relating to the “anti-happenings”—and the palimpsests and serial arrangements of the “anti-pictures” set themselves apart from the academicism of Modernism in more than just formal terms. Koller foregoes every form of technical mastery. The “anti-pictures” are amateurish in style, ensuring that they fulfill their task, defined by Koller as “engaging rather than arranging.”
Julius Koller was born in 1939 in Piestany, Slovakia. He died in 2007 in Bratislava.