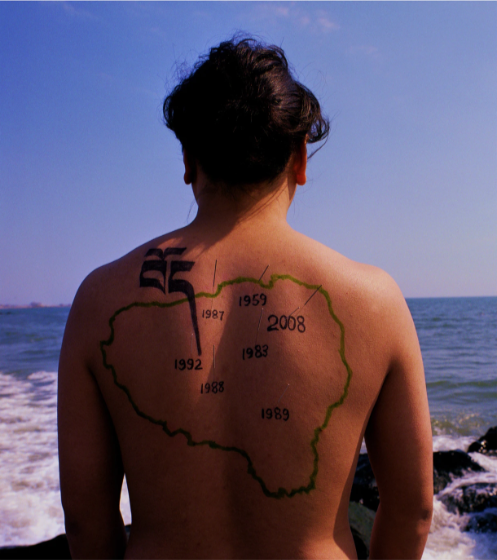 Unhealed is a photograph of the artist’s back tattooed with a map of Tibet with the dates of important political events. Each date and region is marked with a needle, a reference to the traditional Chinese method for treating ailments, used to mark the regions and dates of major uprisings and mass protests as a means of encouraging dialogue and to start the recovery process. Millions of Tibetans have died in those protests. The gesture draws attention to Tenzing Rigdol’s Chinese ‘brothers and sisters’ with the intention of initiating the process of healing.

Tenzing Rigdol is a contemporary Tibetan artist whose work ranges from painting, sculpture, drawing and collage, to digital, video installation, performance art and site-specific pieces. His paintings are the products of collective influences and interpretations of age-old traditions; they often capture the ongoing issues of human conflicts and have strong political undertones – for him, politics is an unavoidable element in his art. He has been widely exhibited internationally. In 2011 his widely reported Our Land, Our People involved the covert transportation of 20 tons of soil out of Tibet, through Nepal, to Dharamsala. There, displaced Tibetans were given the opportunity to walk on their home soil once again. The journey to smuggle the soil across three borders is documented in 'Bringing Tibet Home', a documentary directed by Tenzin Tsetan Choklay, that was awarded the Young European Jury Award (Prix du Jury de Junes Européens) at the 27th edition of FIPA (International Festival of Audiovisual Programmes).
Biography
Tenzing Rigdol
Born 1982, Nepal
Lives in New York City
Details
71 x 63.5 cm
Chromogenic print
Related