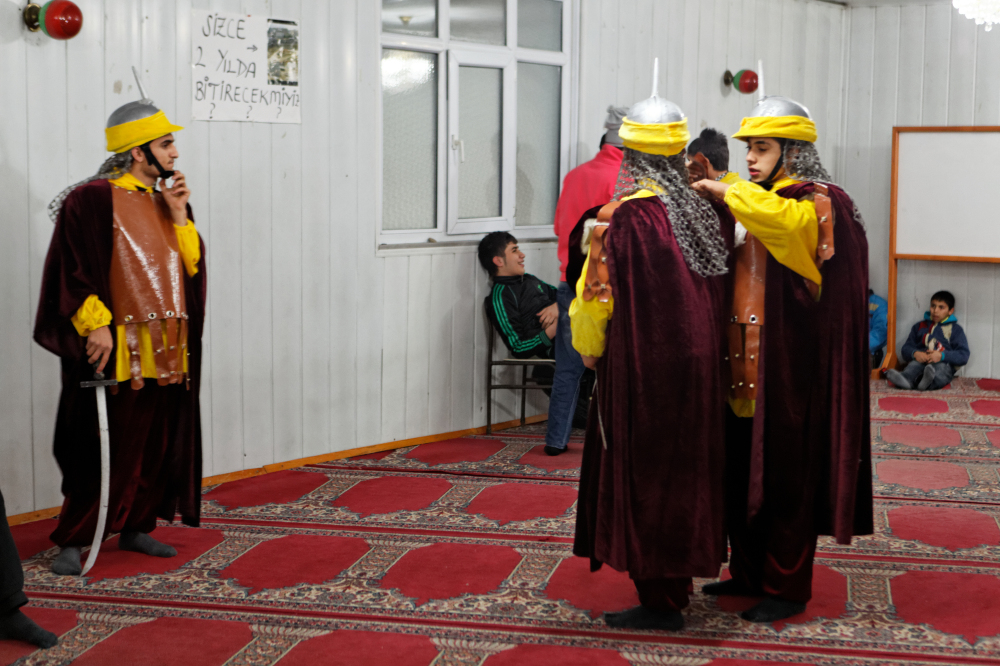 The Battle of Karbala was a military engagement that took place on 10 Muharram, 61 AH (October 10th, 680) in Karbala, situated in present day Iraq, when Hussein, the grandson of the prophet Muhammad, was killed. This battle is central to Shia Muslim belief in which Hussein’s martyrdom is commemorated each year, in a celebration called Ashura which symbolises the birth of Muslim division still at issue today between the Shia and Sunni. During Ashura, the artist worked in close collaboration with the people of Zeynebiye (referring to Hussein’s courageous sister, Zeyneb), documenting their preparations for the ceremonies, which involve a mass theatre performance and the isolated, weeping ritual at the end of the Ashura day. What in other countries is celebrated through a collective performance of blood and pain is experienced here through a highly theatrical and emotional day, presenting Islam as the practice of a culture rather than politics. Ergun attempts to question the cultural importance of religions against a “radical secularism” that has ruled Turkey until now.

Born in Istanbul, in 1976, Köken Ergun studied acting and worked with the American theatre director Robert Wilson. He then became interested in contemporary art, especially video and performance. Ergun’s preoccupations are based on forms of contemporary rituals and celebrations, religious or secular, through events such as national holidays, beauty contests or Olympic games. Ergun also collaborates with ethnologists, extending his practice to academia.