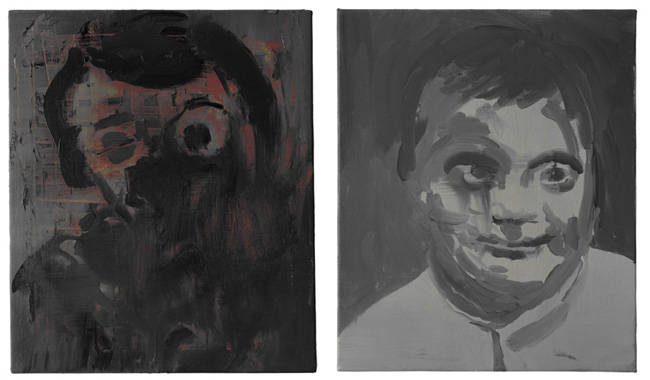 In Untitled (after Paul Schultze Nuremberg’s Kunst) (2006), from a larger series of diptychs, Gmelin addresses the notion of entartete kunst (“Degenerate Art”). Each diptych juxtaposes a portrait of a person considered to be mentally handicapped with a painting that was branded by the Nazi regime as degenerate. Gmelin’s source for these images is Kunst und Rasse (“Art and Race”), a book by Paul Schultze Naumburg published in 1928. Naumburg, one of Hitler’s architects, was a member of the Nazi party and became director of the Weimar Kunsthochschule in 1930. In this capacity he organized an exhibition of 70 ‘degenerate’ artworks from the Weimar Castle Museum. His book was something of a groundbreaker for the Nazi position on modernism. In the book he juxtaposed contemporary works of art with clinical photographs of people with medical deformities. He thus defined the art as pathological. Working from black and white reproductions from the original book, Gmelin himself makes another reproduction in paint. Just as the original thesis, that modern artists were equivalent to mentally handicapped people, is a distortion of the truth, Gemiln distorts his images one stage further. The grey painting, which represents the medically deformed person, is executed in a painterly way. Thus he has rendered a mentally handicapped person in a manner that in the 1920s and 1930s would have demonstrated a modern artist’s degeneracy and declares her as a subject fit for art.  Paradoxically, he has disguised the mental abnormality of the person by juxtaposing the image with an interpretation of a modernist work leaving the viewer, for a moment, wondering which image was sourced from a painting and which from a photograph of a living person. The diptych is thus deeply ironic as well as poignant. But by treating the two images in a similar, painterly way, Gmelin also neutralizes the impact that the juxtaposition of the two images has when viewed on the page of the book. Gmelin thus offers a comment on how in our present culture art no longer has the capacity to shock; that anything goes. Transgression is more or less a thing of the past.