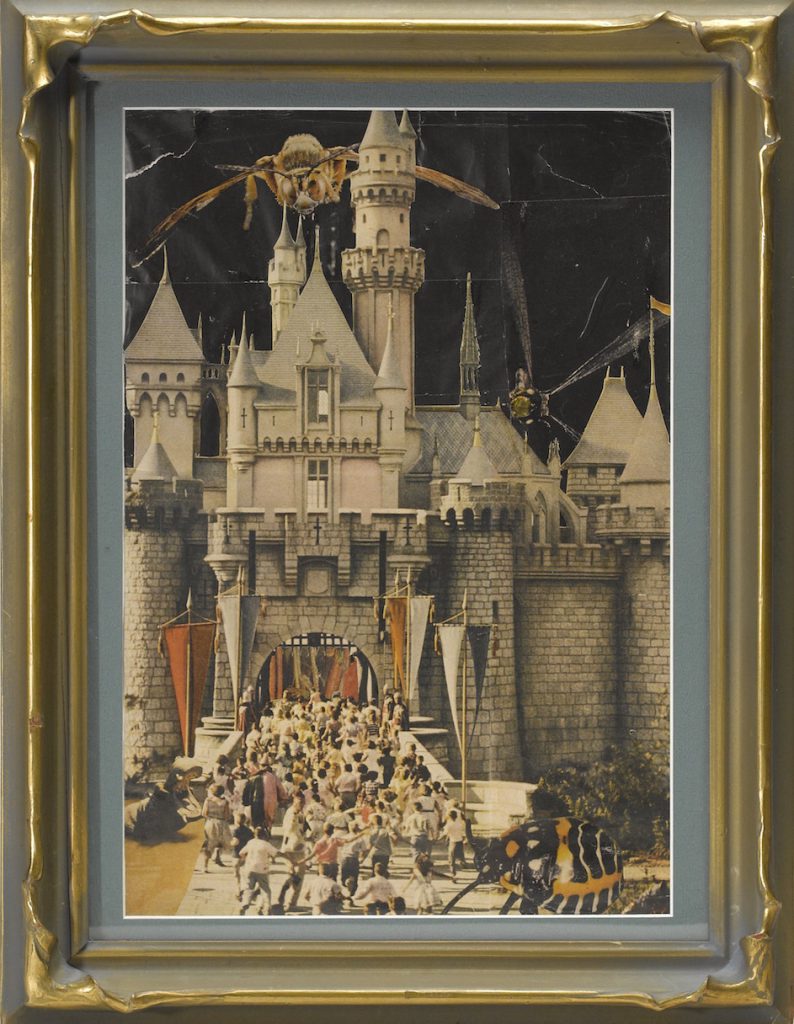 Untitled (Disneyland Opens) is a collage by Jess that refers back to the inauguration of Disneyland in Anaheim, California in 1955, and suggests an alternate, more sinister version of events. The inaugural celebrations themselves are remembered for being tumultuous. The great popularity of the opening—together with thousands of counterfeited invitation passes—drew enormous and unexpected crowds that the park was not prepared for. Food and drinks ran out early on and several incidents such as a gas leak, broken rides, and an overcrowded steamboat that nearly capsized were reported. Jess’ modification of iconic images from the event adds a surreal and dark tone to the already chaotic scene: in his collage, a giant bee and other giant insects menacingly hover over the castle, and a Hippopotamus in an aggressive stance launches towards what now appear to be panicked crowds running for cover. As per several of his other collage works, Untitled (Disneyland Opens) is characterised by a restrained colour palette incorporating black-and-white cut outs and sepia tones, as well as by a playful approach to scale through the use of found imagery.

Jess Collins (most commonly known as Jess), is a celebrated San Francisco artist known for his highly symbolic paintings and layered collages that combine imagery from mythology, alchemy, popular culture and the male body. He originally studied chemistry, and after being drafted into the military at a young age, he worked in a plutonium mining project for manufacturing atomic bombs, and later in a project focusing on atomic energy. His growing concern for the threat that atomic weaponry posed to our planet is said to be one of the factors that led him to abandon his work as a scientist to pursue art full-time. Jess then became a pivotal figure of the Bay Area’s artistic and literary scene, not only through his work as an artist but through his lifelong romantic partnership and artistic collaboration with postwar American poet Robert Duncan. Akin to Duncan’s idiosyncratic poems, Jess’ paintings draw on myth, occultism and religion, often expressed through the dense layering of found images sourced from book illustrations and comic strips that the artist salvaged during his frequent walks around San Francisco’s thrift stores and book shops.
Biography
Jess
Born 1923, USA
Details
17 1/2 x 13 3/4 inches
Related