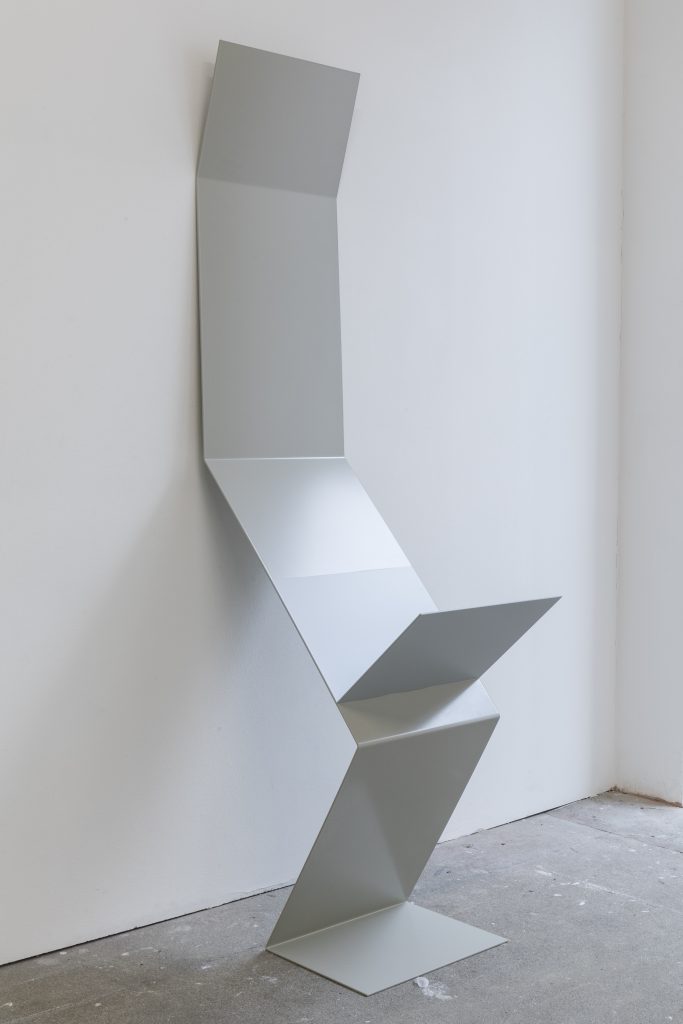 Hopf’s works reference the effects that developments in economics and technology have had on our bodily and mental composition. With her series Laptop Men she presents a humorous reading of the way we interact with computers, and the growing tendency to perceive them as part of our bodies. This takes place against a backdrop of an increasing dependence on implants and prostheses among the human species. We instantly recognize ourselves in the standing or lying steel sculptures resembling thin stickmen, these Laptop Men are perhaps in the process of checking their Facebook account or streaming their favorite series. According to Hopf, these figures were developed with a nod to Modernist sculptures, all while studying the gestures attached to laptops or iPads observed in transit zones such as airports, or other spaces where people have to wait. We try to overcome time with laptops, developing a particular body language in public where the laptop becomes part of the body. The work avoids being too moralistic about a particular idea, attempting instead to deal with the animation of abstract form, feeding it back through a body where electronic tools are already integrated in it.

In her sculptures, installations and videos, German artist Judith Hopf transforms everyday settings and humble materials into comic expressions of humanist values, verging on the absurd. With an understated concision characteristic of her practice, the artist herself describes her working method as an attempt to do something “that doesn’t put me in a bad mood.” Claude Lévi-Strauss’s concept of bricolage resonates not only with Hopf’s formal approach but also in conceptual terms, in the way her works are open to new connections based on their changing context. Resonating with and embodying all the things experienced in a society of overstretching, burnout and chronic exhaustion, Hopf creates sculptures, furniture and absurdist films. She uses humor and wit to address the politics of art making, group dynamics, and the impact of technology on perception and human experience.
Biography
Judith Hopf
Born 1969, Germany
Lives in Berlin
Details
160 x 35 x 60 cm
powder-coated steel
Related