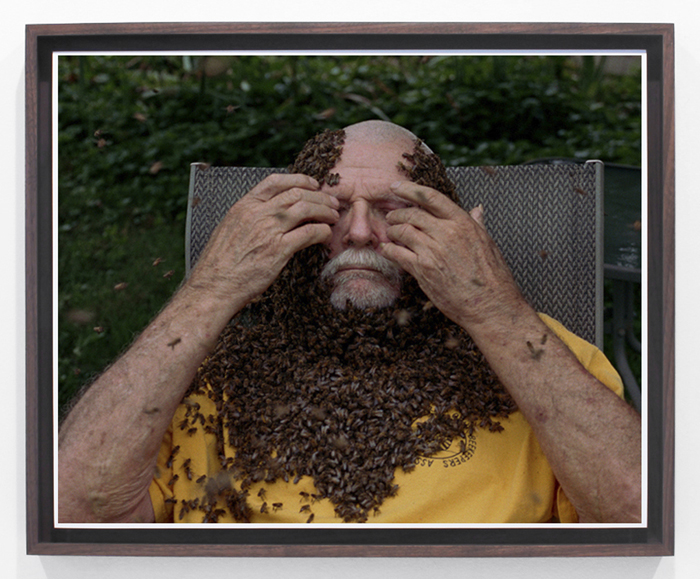 Untitled (Man with Bees), from the series included in the Whitney Museum’s 2019 American Art Biennial, is part of Curran Hatleberg’s attempt to make sense of the current state of the “American Dream”, or lack thereof. “Without question our present American experience feels increasingly strange, unnerving and dreamlike. Our country is utterly different and changed now in its present iteration – surreal and confounding – and we can’t help but regard it with a confounded stare that we hold in reserve for the most bizarre and difficult circumstances.” This image is one, like many in the series that find something poetic, supernatural, and surreal in the common human condition of middle America. This beekeeper, who lives in Ohio, periodically allows the bees that he tends to engulf him—to the point where he must carefully push them back from his eyes, and face, to keep the swarm at bay. A potent metaphor for the struggle to see amidst the buzzing world that surrounds us. His head and neck swollen, transformed—half way to superhero or horror movie.

Curran Hatleberg spends extended amounts of time with his subjects, usually months, building a rapport, building trust, until finally making images with them. This process, of slowly and organically establishing relationships with his subjects, results in extraordinary images that have a sense of ease, as if the camera wasn’t present. His images tell stories, and in series often take the form of photo books, about the America that remains unseen from the vantage of cities. He travels to rural areas, and starts conversations, openly introducing himself from the outset as a photographer… but not letting the conversation stop there. His artist practice is very empathetic, not critical—it’s about seeing, and also knowing. But also about the dreamlike process of narrative building.
Biography
Curran Hatleberg
Born 1982, USA
Lives in Baltimore, MD
Details
25.72 x 30.8 cm
Pigment print
Related