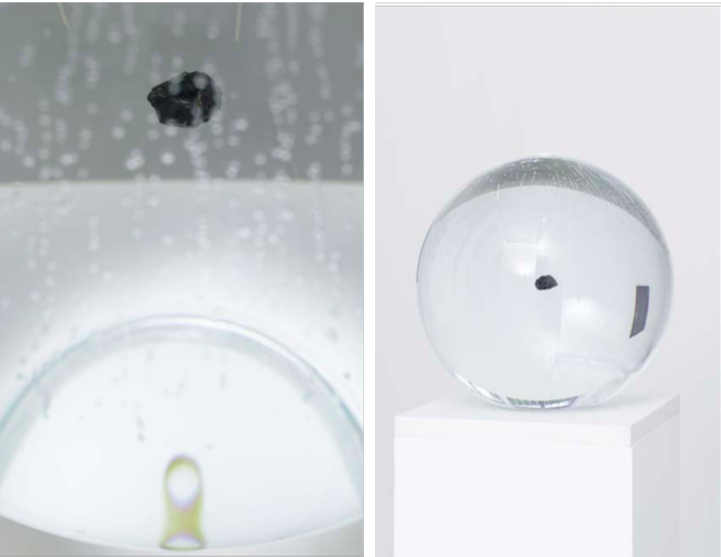 Untitled (Ring) consists of two prominent elements contained in water filled glass sphere. The first, Phinthong’s wife’s ring, cast in recycled gold, collected from damaged electronic devices during Thailand’s great flood in late 2011. It is intended to be a reminder of when the couple consoled one another amid the flooding disaster. The other, a Meteorite, consisting of amino acids and water, an evidence that primitive meteorites brought a large proportion of water to the primordial Earth. In other words, the debris from outer space transporting water to the Earth is suspended over the souvenir made of substance extracted from the wreckage caused by flood. Through this ensemble, the work brings two distant scales, forces and realities closer.

Pratchaya Phintong’s works often arise from the confrontation between different social, economic, or geographical systems. They are the result of a dialogue, and bring all their poetic forces from an almost invisible artistic gesture. From his travels, the artists collects objects, materials, and stories that he assembles in his work. He often looks at gathering forms and matters that are opposite but that complete and correspond to one another.
Biography
Pratchaya Phinthong
Born 1974, Thailand
Lives in Bangkok
Details
Diameter of the sphere: 52 cm / Sphere and its base: 55,5 x 52 x 52 cm / Plinth: 110 x 44,5 cm
Golden ring, CM type meteorite, carbonaceous chondrite, plexiglas sphere, purified water, resin base and wooden white plinth
Related