Jean Claracq
View from an apartment 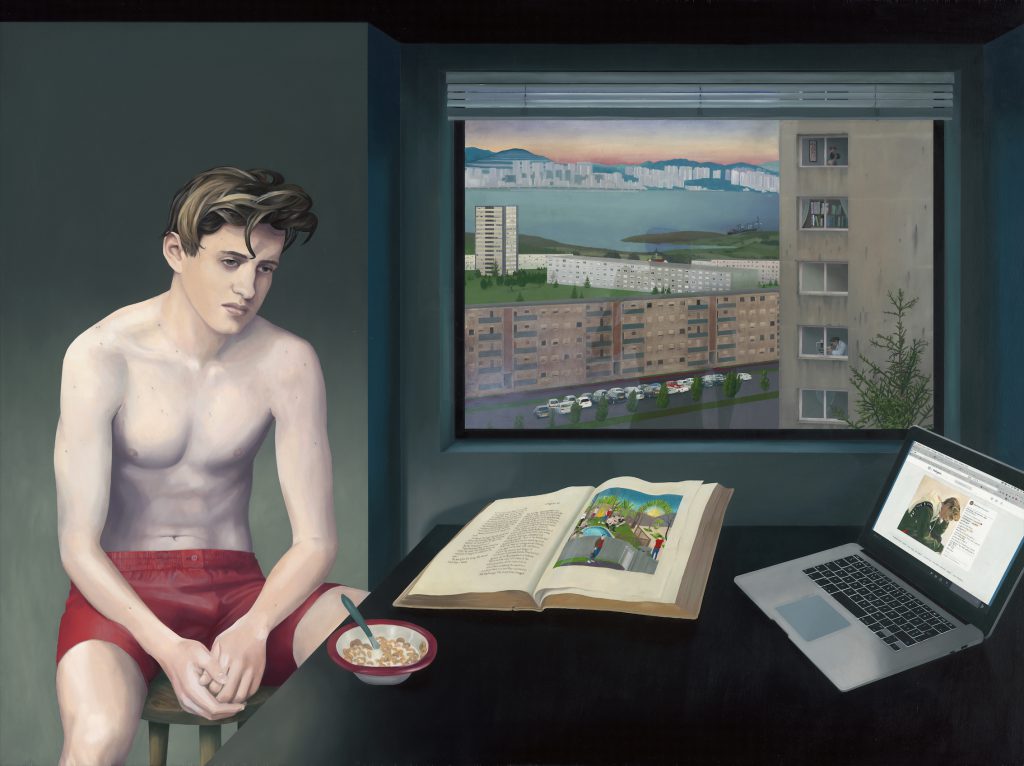 Jean Claracq, A view from an apartment, 2017

View From an Apartment features 18-year-old Joland Novaj whose image was taken from Instagram. Staring vacantly at his cereal bowl, his computer is open on his own Instagram account and Steinbeck’s “Grapes of Wrath” lies open next to it, illustrated with a XV century illumination. Beyond the room there is a bay, lined with modernist buildings. This detailed urban landscape that surrounds Novai is likely to be familiar to both audience and spectator, a nod to Manet’s Un Bar aux Folies Bergères, or Jeff Wall’s View from an Apartment with which Claracq’s piece shares a title. This work is exemplary of Jean Claracq’s practice; before making the work, he knew exactly, intuitively, what type of character he was looking for in his protagonist, while the painting in its totality is the result of the composition of about 70 different references from social media, films, books, art history, and the artist’s own personal life.

Jean Claracq uses his work to deal with issues of loneliness in the social media era, depicting scenes of everyday life featuring isolated individuals against broad infrastructures as an evocation of alienation. His subjects are pulled from social network accounts and portrayed motionless in front of a digital device. These individuals are often straddling the departure from adolescence and entering adulthood, filled with both melancholy and an openness to the future that awaits them. Architecture and its mathematical, atmospheric, and photographic qualities also play a central role in his work. Inspired by Gerhard Richter, he explores the relationship between painting and digital art, using colors and textures that disassociate from photo paper or screen brightness.
His realistic, neat compositions are painted with oil onto wood. They are born from a meticulous process that mixes found images from the Internet and historical references. He enjoys playing with layers of interpretation, incorporating hundreds of references, allowing him to represent an accumulation of perspectives through fragmented images that give way to an imagined reality, aesthetically reminiscent of video games.