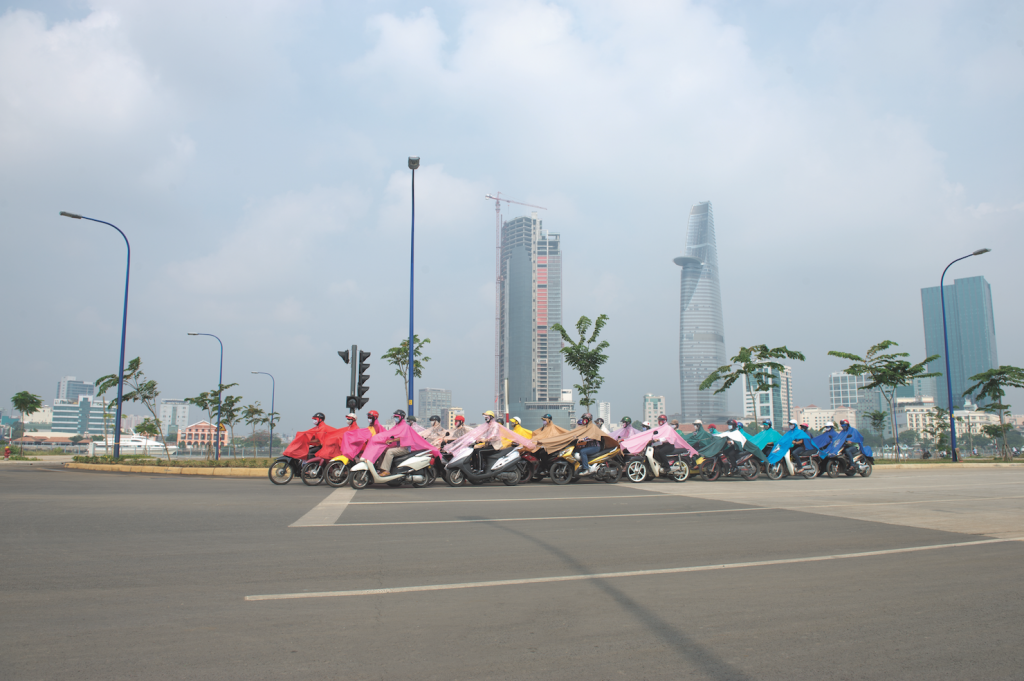 Like many Asian countries, Vietnam has lost an immense amount of natural environment and rural landscape to economic growth and industrial development. The single-channel video Waltz of the Machine Equestrians is a response to the overwhelming number of motorbikes and scooters overtaking the streets of Vietnam as small agrarian communities have been displaced by the construction of skyscrapers. The video shows 28 “equestrians” on motorbikes and scooters arrayed into a rainbow cavalcade held together by strings clipped onto brightly colored ponchos. Wearing helmets, face masks, and sun glasses, the riders attempt to shield themselves from the environment with armors sutured from cheap plastic material. They meander in a procession through a former scenic town near the Saigon River that has become the busy district of Thu Thiem. The precarious turns in the terse choreography is ushered by a soundtrack featuring Dmitri Shostakovich’s histrionic Suite for Variety Orchestra, Waltz no. 2, in which trombones and cymbals echo the increased tensions between the individual and the collective. As the riders break free of each other in a grand finale, the sacrifice of spontaneity in maintaining the mechanical rhythm of such an interdependent enterprise is underscored in light of individual freedom.

Uudam Tran Nguyen born in KonTum Vietnam to an artist family. Although he had lived in the United States for almost two decades, during which he was trained as a figurative sculptor at UCLA and the School of Visual Art in New York, Vietnam remains a central theme in his works. Facile in a variety of media ranging from video, sound and text installations, to guerilla activity, Nguyen engages broad social concerns through using materials with aesthetic appeal. Often posing philosophical inquiries in a humorous manner, Nguyen’s activist works have addressed environmental degradation in Vietnam and often invoke themes drawn from Buddhist philosophy to reflect his namesake.