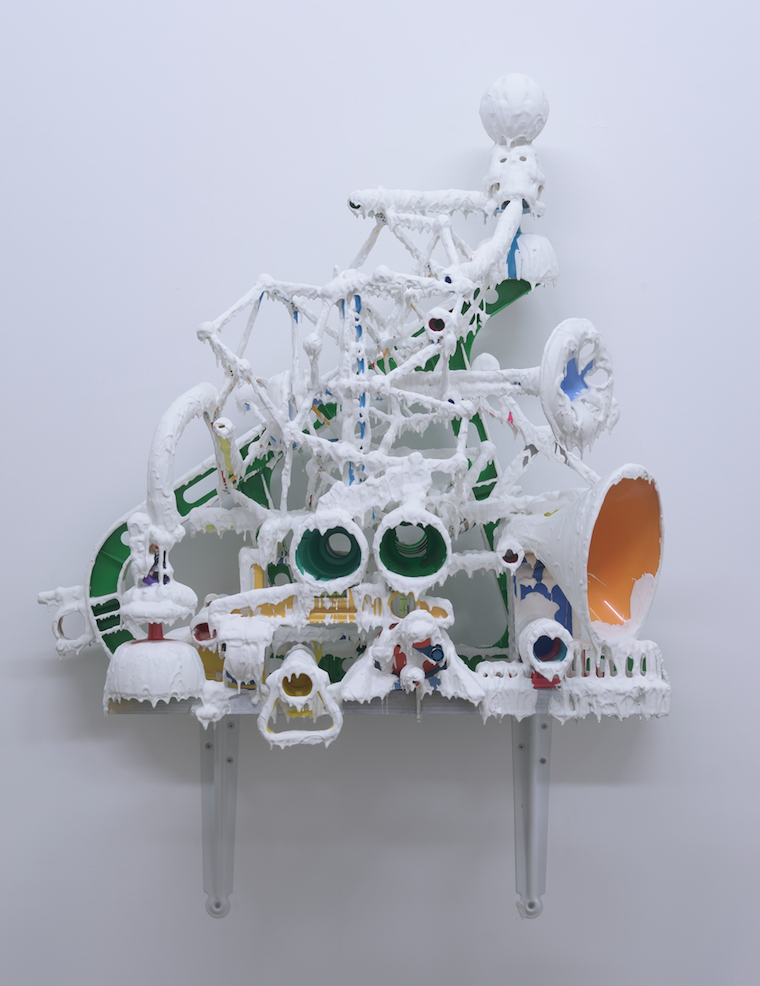 In his White Discharge series (2002 to today), arguably his best known works, Kaneuji assembles old toys and plastic scarps into dramatic mounded heaps and covers the surface with white plastic resin, drawing on allusions to landfills, commodity fetishism, and creative repurposing. White Discharge (Built-Up Objects #38) (2014) appears playful, like a lost landscape from a whimsical Dr. Seuss story awaiting a charmingly wacky inhabitant. But in drawing its source materials from prefabricated and mass-produced objects, Kaneuji’s work also suggests more trenchant anxieties consumer culture and the rapid and wasteful accumulation that becomes “built-up” in all of our lives. In this context, the resin’s “white discharge” could also be read as alluding to an almost masturbatory commodity fetishism in which material objects become the very focus of our erotic fixations. This work offers a striking meditation on the presumed value of everyday objects and our relationship to material goods once they become obsolete, damaged, or deemed unusable. By repurposing these materials for his art, Kaneuji reimagines an almost utopian relationship between consumers and objects in which refuse becomes they very “stuff” and substance of sculpture and installation.

Teppei Kaneuji produces sculptures and installation-based work that interrogates Japan’s continuously burgeoning postwar culture of commodification. Kaneuji explores the relationship between consumers and objects, and he frequently employs found and discarded materials in his art in order to draw attention to questions of use value, accumulation, and waste.