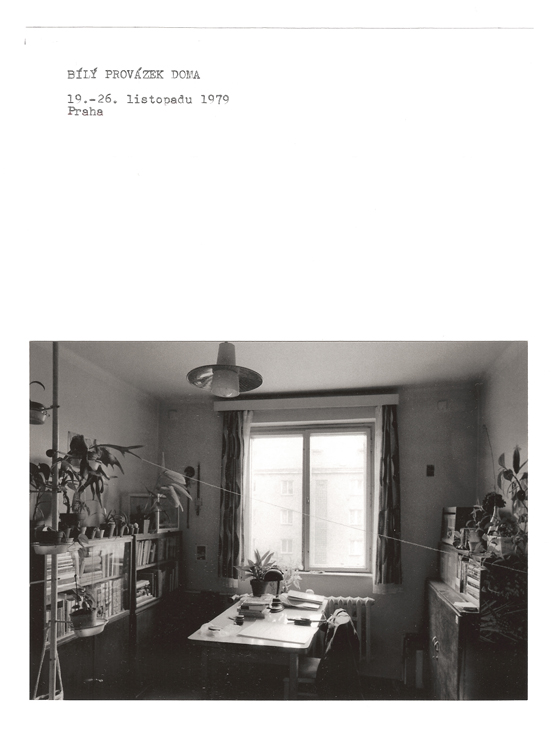 This ephemeral installation by Jirí Kovanda, documented in the same way as his performances with a photograph and a text, belongs to a body of works that took place in his apartment/studio. During an interview with Hans Ulrich Obrist, the artist highlighted that he had never had a studio and that this work space blended with his apartment. A piece of string cuts across the room in a diagonal; it functions as a scale to measure time and space. This element recurs in the artist’s work: during the summer 1979, the artist pulled a string across riverbanks. This work makes present – through coexistence and contrast – the geometry and abstraction of this line with daily objects. The string modifies the space in a minimal way since it can no longer be perceived as a unit due to this diagonal. “At the time, I was reading a lot about zen. Even the most ordinary thing can become extraordinary with a small shift in context. And the simpler the shift, the better. It is just about perturbing a stereotype and intensifying a sensation, life”, said the artist in an interview with Guillaume Leingre (Particules, issue 18). This string could function like a haïku, the very short Japanese poems that aim to capture the evanescence of things: perhaps he is materializing a spider’s web, a ray of sunshine, the link between two ideas…
All Kovanda’s artistic practice poses the question of visibility. Having worked on actions and performance, the artist decided to ‘disappear’ from his artworks during twenty years; in 2007, his performance Kissing through glass in the institutional setting of Tate Modern was acclaimed by critics. Some works are only visible thirty years later via traces and archives; the artist’s rehabilitation by institutions and galleries offers a new critical reading of his practice which had until then remained rather confidential. What is particularly noted are his links with the history of gesture since the 1970s.
Jirí Kovanda’s works have in common a great economy of means. The artist assures that we need “get along with what we have”, which in his case meant gestures, objects, and non-artistic materials, used in interventions or installations. The artworks are incredibly slight and come together in a fragile equilibrium: brushing against passers-by in the street (1977), making a branch hold on two chewing-gums (2008). His actions – theatre with no spectator ? – question the threshold of visibility, until they become ‘absurd’ (in the etymological sense of what cannot be heard). The artist ignites thinking about the other and about form, two ideas that connect the work.