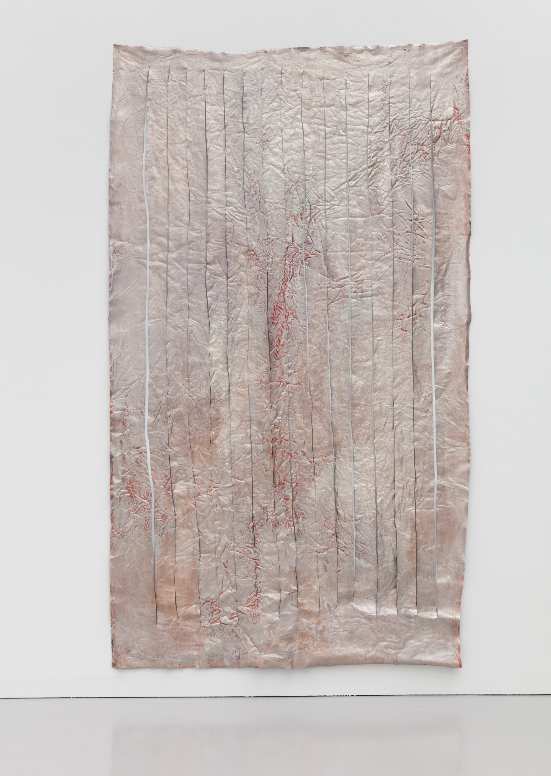 The impressionistic surface of Wild Money (2017) recalls the 1950s paintings of Philip Guston. Its creases recall human skin, while the filigree pattern of red skeins implies what lies beneath. The body is fully implicated in this work. The ink is applied to both sides of the linen and suggests an inner and outer dimension. The titles of Gannon’s work frequently reference books: in this case Wild Money by Luna Jaffe, a visual artist and psychotherapist. It is a book aimed at artists about feelings for money and the artist’s relationship to money. In Wild Money, Gannon speaks both to the materiality of the densely woven fabric and the spaces that are opened up through the cuts.

Laura Gannon works across a range of media: painting, drawing, sculpture and video. With a background in film, she has often installed her video work using dividing elements, screens or benches, to create selective viewing experiences for her audience. The artist has recently developed a series of paintings using metallic ink on unstretched linen. At the end of the painting process, the artist cuts into the linen. While cutting gestures inevitably make reference to the work of Lucio Fontana, Gannon’s interests are different. Fontana was interested in breaking the picture plane, the cuts in his work created dark mysterious slits. Gannon, by contrast, seeks to admit light and thus incorporating the wall into the work itself. Her work has a strong relation to the body, whether through the gesture of cutting or its impression of capillaries. Gannon’s practice can be understood as the meeting point of the performative and the sculptural.
Biography
Laura Gannon
Born 1972, Ireland
Lives in Dublin
Details
235 x 130 cm
Ink on linen
Related