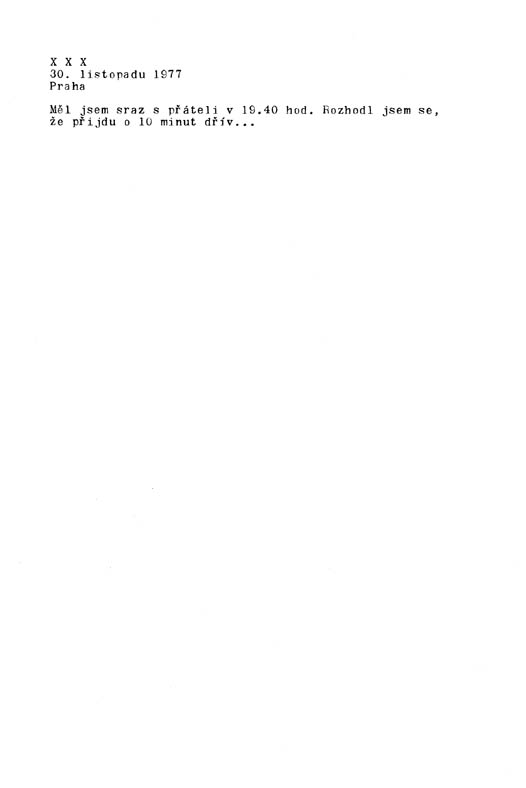 All Kovanda’s artistic practice poses the question of visibility. Having worked on actions and performance, the artist decided to ‘disappear’ from his artworks during twenty years; in 2007, his performance Kissing through glass in the institutional setting of Tate Modern was acclaimed by critics. Some works are only visible thirty years later via traces and archives; the artist’s rehabilitation by institutions and galleries offers a new critical reading of his practice which had until then remained rather confidential. What is particularly noted are his links with the history of gesture since the 1970s.
Jirí Kovanda’s works have in common a great economy of means. The artist assures that we need “get along with what we have”, which in his case meant gestures, objects, and non-artistic materials, used in interventions or installations. The artworks are incredibly slight and come together in a fragile equilibrium: brushing against passers-by in the street (1977), making a branch hold on two chewing-gums (2008). His actions – theatre with no spectator ? – question the threshold of visibility, until they become ‘absurd’ (in the etymological sense of what cannot be heard). The artist ignites thinking about the other and about form, two ideas that connect the work.
Kovanda’s ‘discreet’ actions (leaving a discussion in a rush, bumping into passers-by in the street, making a pile of rubbish and scattering it, looking at the sun until tears come…) are always documented according to the same format: a piece of A4 paper, a concise typewritten text, and sometimes a photograph taken by someone else.
In this action, the artist arrives for a rendez-vous 10 minutes early and positions himself to wait alone until his friends join him. Jirí Kovanda introduces slight disjunctions with the social use of time and this action plays with the notion of not arriving late. This work has resonance with a missed rendez-vous, one of the artist’s last actions. On 23 January 1978, the artist did not appear for a rendez-vous he had made with friends on a square in Prague, ‘disappearing’ from his works until 2000.
A complex relation comes to be between the action, its documentation, and its audience, posing the question of their meaning. His works have been exhibited some thirty years after they took place for a ‘second audience’. “I think that the message was sending out was not intended for the people who were present when the actions happened at the concrete moment they were taking place. The message was intended more for those who would read about them as actions. What I was interested in was something ordinary, something normal, that might happen that way. That’s what they were all about. For me, they don’t have any symbolic meaning”, according to the artist.