Jiri Kovanda
XXX...I walk along carefully, very carefully, as if I were on ice that might crack at any moment. 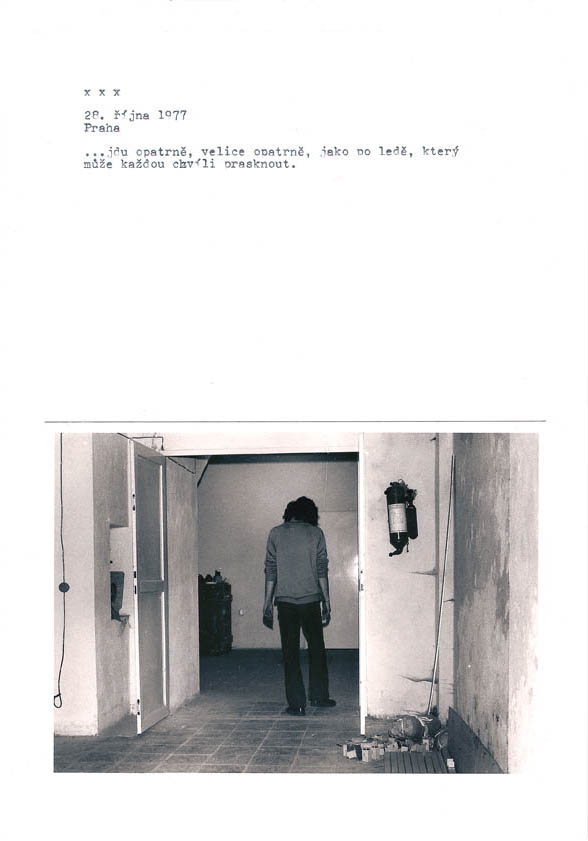 Jiri Kovanda, XXX...I walk along carefully, very carefully, as if I were on ice that might crack at any moment., 1977.

Kovanda’s ‘discreet’ actions (leaving a discussion in a rush, bumping into passers-by in the street, making a pile of rubbish and scattering it, looking at the sun until tears come…) are always documented according to the same format: a piece of A4 paper, a concise typewritten text, and sometimes a photograph taken by someone else. This action, walking abnormally slowly, questions the place of the individual within the space of a city with regards to social habits. Kovanda places himself slightly outside the regulated rhythm of the city walking. “A [certain] reading consists in analyzing the artist’s micros-interventions which have taken place in the public sphere during the Soviet era in Prague specifically as political art which the artist refutes.” (extract from the journal Particules). Was he noticed as ‘suspect’? His footsteps mime prudence, as if there was a potential risk underfoot. The title describes and at the same time renders poetic the artist’s walk. Walking is equivalent to creating, according to Thierry Davila (Marcher, créer, éditions du Regard, 2007). A complex relation comes to be between the action, its documentation, and its audience, posing the question of their meaning. His works have been exhibited some thirty years after they took place for a ‘second audience’. “I think that the message I was sending out was not intended for the people who were present when the actions happened at the concrete moment when they were taking place. The message was intended more for those who would read about them as actions. What I was interested in was something ordinary, something normal, that might happen that way. That’s what they were all about. For me, they don’t have any symbolic meaning”, according to the artist.