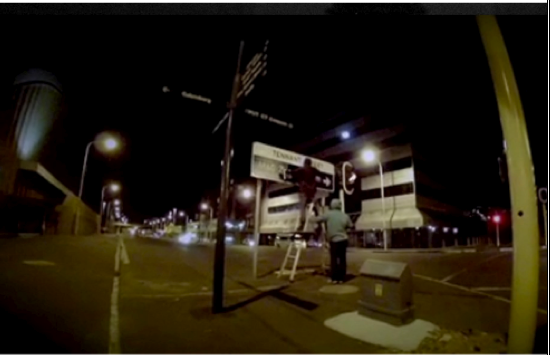 Executed on Sunday 17 August 2013, “Zonnebloem renamed” is a site-specific performative video film marking the centenary of the 1913 Natives Land Act in South Africa. The short film forms part of the artist’s ongoing collaboration with District Six residents titled WITNESS. Commencing in 2011, WITNESS negotiates the forced removals and land compensation in District Six and across South Africa. District Six was a closely-knit, vibrant and multi-cultural community until the forced removal by the apartheid decree during the 1970s from Cape Town’s city center, when the area was declared ‘whites only’ under the Group Areas Act in 1968. During this time, District Six was officially renamed by the apartheid government as Zonnebloem. The renaming further erased the history of the area and people from maps, memories and public spaces. Gunn-Salie’s short film presents a series of temporary artworks by changing the ‘Zonnebloem’ road signs in central Cape Town to read ‘District Six’. “Zonnebloem renamed” is an attempt by Gunn-Salie to change apartheid and colonial heritage that dominates people popular memory in Cape Town and South Africa through aesthetic and social intervention.